George Walters - George Stanfield Walters was born in 1838 and died in 1924.
A marine and coastal painter. He was grandson to ship portraitist Miles Walters,
and son and pupil of Samuel Walters, who had served in the navy and was a marine
painter living in Liverpool and Bootle. G.S. Walters moved to London in about 1864,
was elected to the Society of British Artists in 1897. He was a prolific exhibitor, and
he painted on the Channel coasts as well as landscapes in the Lake District, the Thames
and Wales and scenes on the Venetian Lagoon. His work is sometimes on a very large
scale and he has a penchant for pinks, russets and sunsets. He has exhibited at The
Royal Society of British Artists -Birmingham, Dudley Gallery and New Dudley Gallery,
Grosvenor Gallery, Walker Gallery - Liverpool, Manchester City Gallery, Royal Academy
Royal British Academy, Royal Institute of Painters in Watercolour, Royal Institute of Oil Painters,
Royal Scottish Society of Painters in Watercolour and Arthur Tooth & Sons Gallery. 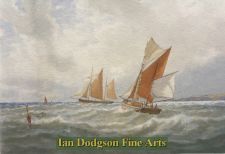 Ian Dodgson Fine Arts reserves the right to change details on the website at any time.